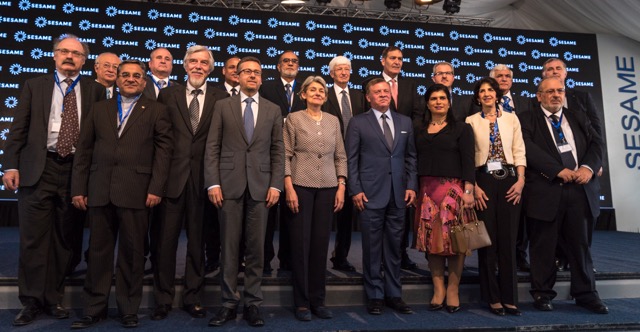 On behalf of SESAME

Allan, Jordan, 16 May 2017. The SESAME light source was today officially opened by His Majesty King Abdullah II. An intergovernmental organization, SESAME is the first regional laboratory for the Middle East and neighbouring regions The laboratory’s official opening ushers in a new era of research covering fields ranging from medicine and biology, through materials science, physics and chemistry to healthcare, the environment, agriculture and archaeology.

Speaking at the opening ceremony, the President of the SESAME Council, Professor Sir Chris Llewellyn Smith said: “Today sees the fulfilment of many hopes and dreams. The hope that a group of initially inexperienced young people could build SESAME and make it work - they have: three weeks ago SESAME reached its full design energy. The hope that, nurtured by SESAME’s training programme, large numbers of scientists in the region would become interested in using SESAME – they have: 55 proposals to use the first two beamlines have already been submitted. And the hope that the diverse Members could work together harmoniously. As well as being a day for celebration, the opening is an occasion to look forward to the science that SESAME will produce, using photons provided by what will soon be the world’s first accelerator powered solely by renewable energy.”

SESAME, which stands for Synchrotron-light for Experimental Science and Applications in the Middle East, is a particle accelerator-based facility that uses electromagnetic radiation emitted by circulating electron beams to study a range of properties of matter. Its initial research programme is about to get underway: three beamlines will be operational this year, and a fourth in 2019. Among the subjects likely to be studied in early experiments are pollution in the Jordan River valley with a view to improving public health in the area, as well as studies aimed at identifying new drugs for cancer therapy, and cultural heritage studies ranging from bioarcheology – the study of our ancestors – to investigations of ancient manuscripts. Professor Khaled Toukan the Director of SESAME, said “In building SESAME we had to overcome major financial, technological and political challenges, but – with the help and encouragement of many supporters in Jordan and around the world – the staff, the Directors and the Council did a superb job. Today we are at the end of the beginning. Many challenges lie ahead – including building up the user community, and constructing additional beamlines and supporting facilities. However, I am confident that - with the help of all of you here today, including especially Rolf Heuer, who will take over from Chris Llewellyn Smith as President of the Council tomorrow (and like Chris and his predecessor Herwig Schopper is a former Director General of CERN) - these challenges will be met.”

The opening ceremony was an occasion for representatives of SESAME’s Members and Observers to come together to celebrate the establishment of a competitive regional facility, building regional capacity in science and technology.

Photographs of the opening ceremony may be found here

1. CERN, the European Organization for Nuclear Research, is one of the world's leading laboratories for particle physics. The Organization is located on the French-Swiss border, with its headquarters in Geneva. Its Member States are: Austria, Belgium, Bulgaria, Czech Republic, Denmark, Finland, France, Germany, Greece, Hungary, Israel, Italy, Netherlands, Norway, Poland, Portugal, Romania, Slovakia, Spain, Sweden, Switzerland and United Kingdom. Cyprus and Serbia are Associate Member States in the pre-stage to Membership. India, Pakistan, Turkey and Ukraine are Associate Member States. The European Union, Japan, JINR, the Russian Federation, UNESCO and the United States of America currently have Observer status.

The CERN Library gets a facelift

Don’t miss the live stream of the launch of R...

The ARIES project, a promoter of innovation a...