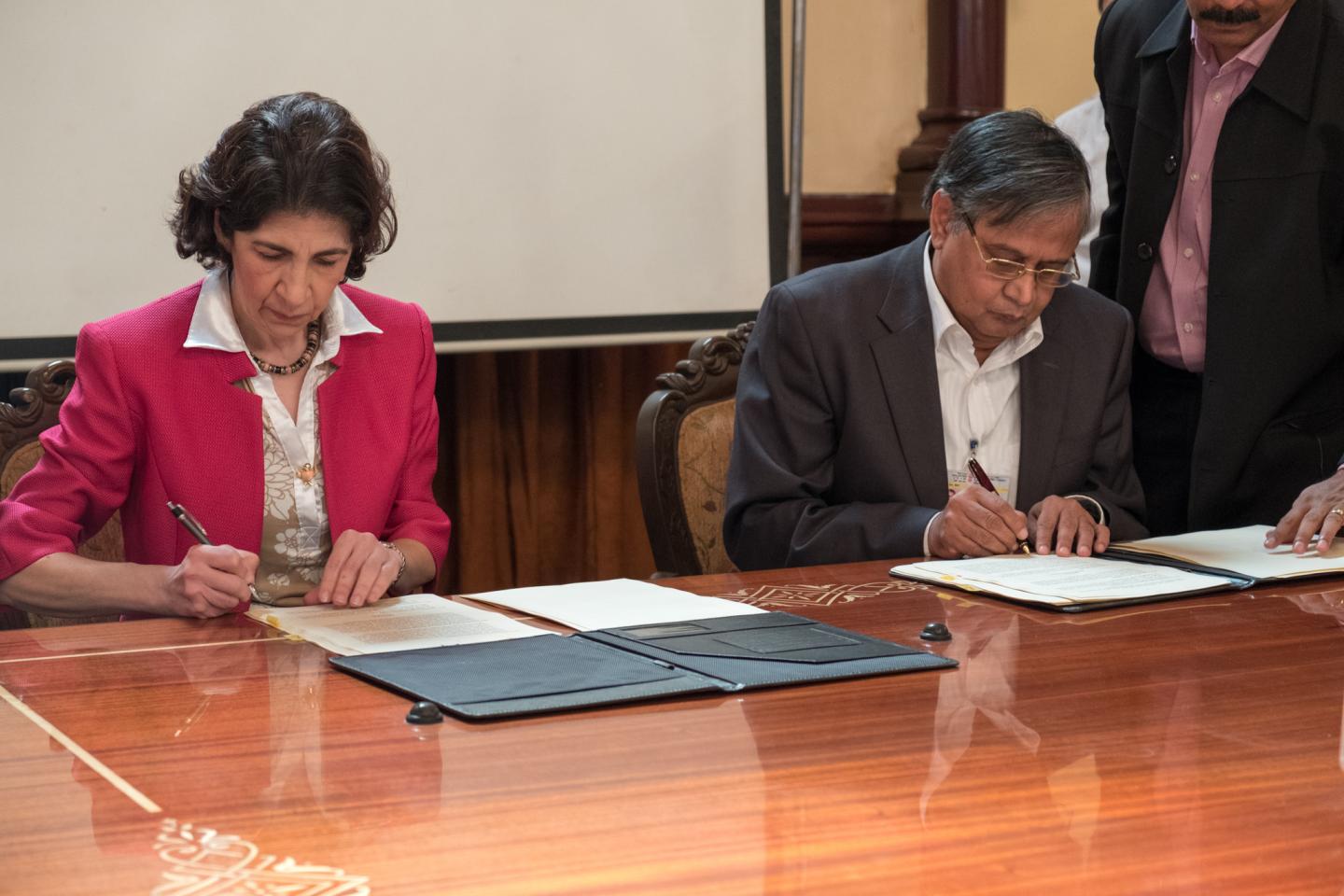 CERN Director General, Fabiola Gianotti, and Chairman of the Atomic Energy Commission and Secretary of the Department of Atomic Energy of the Government of India, Sekhar Basu signed an Agreement admitting India to CERN as an Associate Member.

Geneva and Mumbai, 21 November 2016. Today, CERN1 Director General, Fabiola Gianotti, and Chairman of the Atomic Energy Commission and Secretary of the Department of Atomic Energy (DAE) of the Government of India, Sekhar Basu signed an Agreement admitting India to CERN as an Associate Member. The Government of India still needs to notify CERN of its final approval for the Agreement to enter into force.

“India has been putting efforts to design, develop and utilise various types of electron and proton accelerators for scientific, industrial and societal use,” said Sekhar Basu. “Becoming Associate Member of CERN will enhance participation of young scientists and engineers in various CERN projects and bring back knowledge for deployment in the domestic programmes. It will also provide opportunities to Indian industries to participate directly in CERN Projects.”

“For over 50 years, India has been a strong partner in CERN’s scientific activities,” said Fabiola Gianotti. “For instance, Indian physicists, engineers and technicians have made substantial contributions to the construction of the LHC accelerator and to the ALICE and CMS experiments, as well as to accelerator R&D projects. I am very happy to welcome India as a new Associate Member State and I'm looking forward to enhanced cooperation on CERN’s exciting scientific and technology programmes.”

India and CERN signed a Cooperation Agreement in 1991, setting priorities for scientific and technical cooperation, followed by the signature of several Protocols. India’s relationship with the Organization dates back much further, initially through cooperation with the Tata Institute of Fundamental Research, whose high-energy physicists have been actively participating in experiments at CERN since the 1960s. They were later joined by scientists from the Raja Ramanna Centre for Advanced Technology, Indore, in the 1990s. These and other institutes built components for the LEP accelerator and the L3, WA93 and WA98 detectors. Their scientists participated in important physics analyses and publications throughout the years.

All these developments paved the way, in 1996, for the Indian AEC (Atomic Energy Commission) to agree to take part in the construction of the LHC, and to contribute to the CMS and ALICE experiments and to the LHC Computing Grid with Tier-2 centres in Mumbai and Kolkata. In recognition of these substantial contributions, India was granted Observer status to the CERN Council in 2002. The success of the DAE-CERN partnership regarding the LHC has also led to cooperation on Novel Accelerator Technologies through DAE’s participation in CERN’s Linac4, SPL and CTF3 projects, and CERN’s contribution to DAE’s programmes. India also participates in the COMPASS, ISOLDE and nTOF experiments.

India’s Associate Membership will strengthen the long-term partnership between CERN and the Indian scientific community. Associate Membership will allow India to take part in meetings of the CERN Council and its committees (Finance Committee and Scientific Policy Committee). It will also make Indian scientists eligible for staff appointments. Finally, once the Agreement enters into force, Indian industry will be entitled to bid for CERN contracts, which will open up opportunities for industrial collaboration in areas of advanced technology.