The hunt for leptoquarks is on 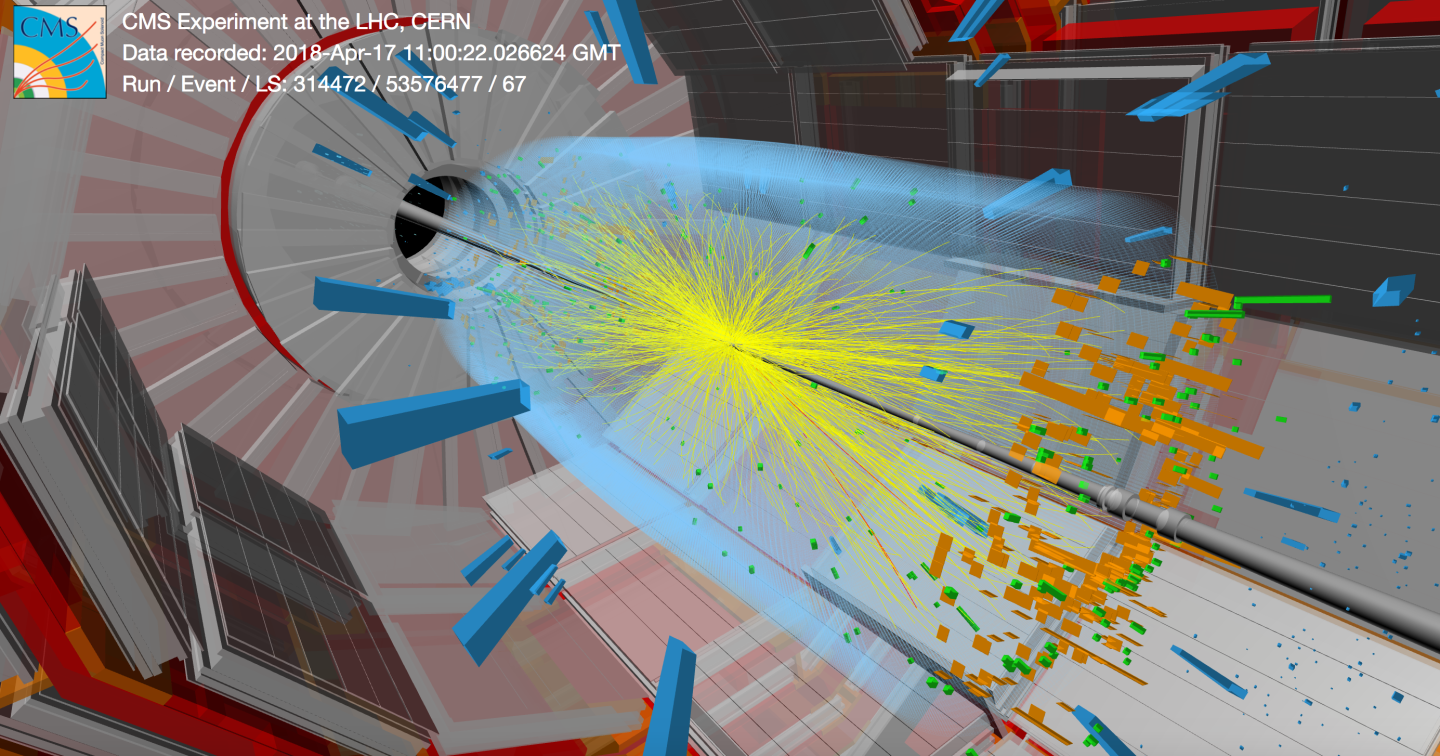 A collision event recorded by CMS at the start of the data-taking run of 2018. CMS sifts through such collisions up to 40 million times per second looking for signs of hypothetical particles like leptoquarks (Image: Thomas McCauley/Tai Sakuma/CMS/CERN)

Matter is made of elementary particles, and the Standard Model of particle physics states that these particles occur in two families: leptons (such as electrons and neutrinos) and quarks (which make up protons and neutrons). Under the Standard Model, these two families are totally distinct, with different electric charges and quantum numbers, but have the same number of generations (see image below).

However, some theories that go beyond the Standard Model, including certain “grand unified theories”, predict that leptons and quarks merge at high energies to become leptoquarks. These leptoquarks are proposed in theories attempting to unify the strong, weak and electromagnetic forces.

Such “unifications” are not unusual in physics. Electricity and magnetism were famously unified in the 19th century into a single force known as electromagnetism, via Maxwell’s elegant mathematical formulae. In the case of leptoquarks, these hybrid particles are thought to have the properties of both leptons and quarks, as well as the same number of generations. This would not only allow them to “split” into the two types of particles but would also allow leptons to change into quarks and vice versa. Indeed, anomalies detected by the LHCb experiment as well as by Belle and Babar in measurements of the properties of B mesons could be also explained by the existence of these hypothesised particles.

If leptoquarks exist, they would be very heavy and quickly transform, or “decay”, into more stable leptons or quarks. Previous experiments at the SPS and LEP at CERN, HERA at DESY and the Tevatron at Fermilab have looked at decays to first- and second-generation particles. Searches for third-generation leptoquarks (LQ3) were first performed at the Tevatron, and are now being explored at the Large Hadron Collider (LHC).

Since leptoquarks would transform into a lepton and a quark, LHC searchers look for telltale signatures in the distributions of these “decay products”. In the case of third-generation leptoquarks, the lepton could be a tau or a tau neutrino while the quark could be a top or bottom.

In a recent paper, using data collected in 2016 at a collision energy of 13 TeV, the Compact Muon Solenoid (CMS) collaboration at the LHC presented the results of searches for third-generation leptoquarks, where every LQ3 produced in the collisions initially transformed into a tau-top pair.

Because colliders produce particles and antiparticles at the same time, CMS specifically searched for the presence of leptoquark-antileptoquark pairs in collision events containing the remnants of a top quark, an antitop quark, a tau lepton and an antitau lepton. Further, because leptoquarks have never been seen before and their properties remain a mystery, physicists rely on sophisticated calculations based on known parameters to look for them. These parameters include the energy of the collisions and expected background levels, constrained by the possible values for the mass and spin of the hypothetical particle. Through these calculations, the scientists can estimate how many leptoquarks might have been produced in a particular data set of proton-proton collisions and how many might have been transformed into the end products their detectors can look for.

“Leptoquarks have become one of the most tantalising ideas for extending our calculations, as they make it possible to explain several observed anomalies. At the LHC we are making every effort to either prove or exclude their existence,” says Roman Kogler, a physicist on CMS who worked on this search.

After sifting through collision events looking for specific characteristics, CMS saw no excess in the data that might point to the existence of third-generation leptoquarks. The scientists were therefore able to conclude that any LQ3 that transform exclusively to a top-tau pair would need to be at least 900 GeV in mass, or around five times heavier than the top quark, the heaviest particle we have observed.

The limits placed by CMS on the mass of third-generation leptoquarks are the tightest so far. CMS has also searched for third-generation leptoquarks that transform into a tau lepton and a bottom quark, concluding that such leptoquarks would need to be at least 740 GeV in mass. However, it is important to note that this result comes from the examination of only a fraction of LHC data at 13 TeV, from 2016. Further searches from CMS and ATLAS that take into account data from 2017 as well as the forthcoming run of 2018 will ensure that the LHC can continue to test theories about the fundamental nature of our universe.

CMS sets new bounds on the mass of leptoquark...

Mapping out the future of high-energy physics...

ATLAS and CMS release results of most compreh...

The Higgs boson, ten years after its discover...