In a paper published today in Nature Physics, the ALICE collaboration reports that proton collisions sometimes present similar patterns to those observed in the collisions of heavy nuclei. 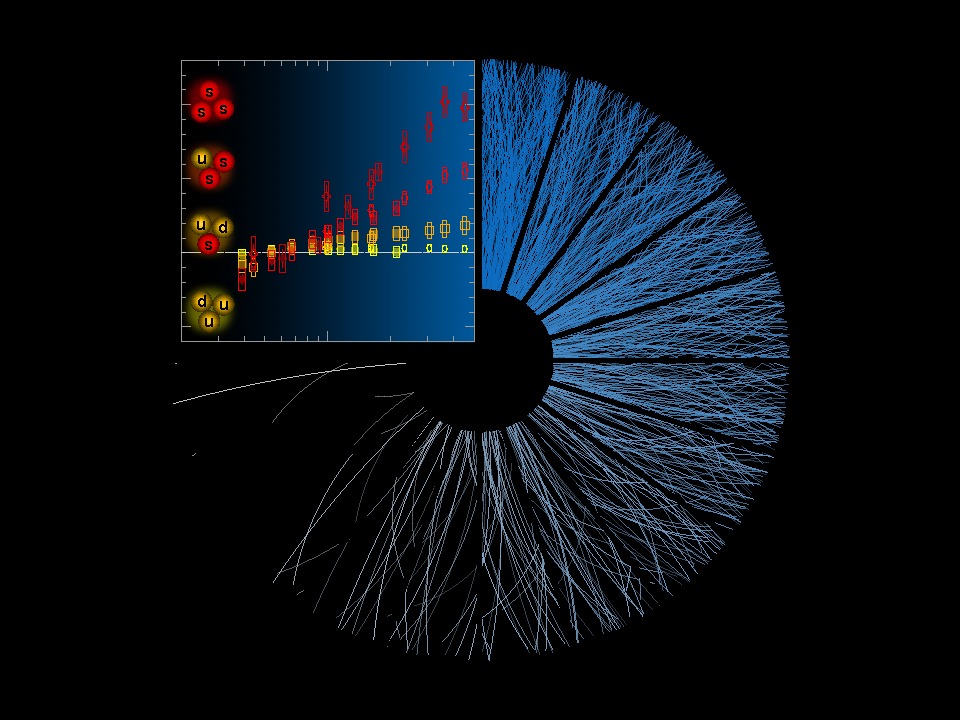 As the number of particles produced in proton collisions (the blue lines) increase, the more of these so-called strange hadrons are seen (as shown by the red squares in the graph). (Image: CERN)

Geneva 24 April 2017. In a paper published today in Nature Physics, the ALICE collaboration reports that proton collisions sometimes present similar patterns to those observed in the collisions of heavy nuclei. This behaviour was spotted through observation of so-called strange hadrons in certain proton collisions in which a large number of particles are created. Strange hadrons are well-known particles with names such as Kaon, Lambda, Xi and Omega, all containing at least one so-called strange quark. The observed ‘enhanced production of strange particles’ is a familiar feature of quark-gluon plasma, a very hot and dense state of matter that existed just a few millionths of a second after the Big Bang, and is commonly created in collisions of heavy nuclei. But it is the first time ever that such a phenomenon is unambiguously observed in the rare proton collisions in which many particles are created. This result is likely to challenge existing theoretical models that do not predict an increase of strange particles in these events.

“We are very excited about this discovery,” said Federico Antinori, Spokesperson of the ALICE collaboration. “We are again learning a lot about this primordial state of matter. Being able to isolate the quark-gluon-plasma-like phenomena in a smaller and simpler system, such as the collision between two protons, opens up an entirely new dimension for the study of the properties of the fundamental state that our universe emerged from.”

The study of the quark-gluon plasma provides a way to investigate the properties of strong interaction, one of the four known fundamental forces, while enhanced strangeness production is a manifestation of this state of matter. The quark-gluon plasma is produced at sufficiently high temperature and energy density, when ordinary matter undergoes a transition to a phase in which quarks and gluons become ‘free’ and are thus no longer confined within hadrons. These conditions can be obtained at the Large Hadron Collider by colliding heavy nuclei at high energy. Strange quarks are heavier than the quarks composing normal matter, and typically harder to produce. But this changes in presence of the high energy density of the quark-gluon plasma, which rebalances the creation of strange quarks relative to non-strange ones. This phenomenon may now have been observed within proton collisions as well.

Enhanced strangeness production had been suggested as a possible consequence of quark-gluon plasma formation since the early eighties, and discovered in collisions of nuclei in the nineties by experiments at CERN1's Super Proton Synchrotron. Another possible consequence of the quark gluon plasma formation is a spatial correlation of the final state particles, causing a distinct preferential alignment with the shape of a ridge. Following its detection in heavy-nuclei collisions, the ridge has also been seen in high-multiplicity proton collisions at the Large Hadron Collider, giving the first indication that proton collisions could present heavy-nuclei-like properties. Studying these processes more precisely will be key to better understand the microscopic mechanisms of the quark-gluon plasma and the collective behaviour of particles in small systems.

The ALICE experiment has been designed to study collisions of heavy nuclei. It also studies proton-proton collisions, which primarily provide reference data for the heavy-nuclei collisions. The reported measurements have been performed with 7 TeV proton collision data from LHC run 1.

1. CERN, the European Organization for Nuclear Research, is one of the world's leading laboratories for particle physics. The Organization is located on the French-Swiss border, with its headquarters in Geneva. Its Member States are: Austria, Belgium, Bulgaria, Czech Republic, Denmark, Finland, France, Germany, Greece, Hungary, Israel, Italy, Netherlands, Norway, Poland, Portugal, Romania, Slovakia, Spain, Sweden, Switzerland and United Kingdom. Cyprus and Serbia are Associate Member States in the pre-stage to Membership. India, Pakistan, Turkey and Ukraine are Associate Member States. The European Union, Japan, JINR, the Russian Federation, UNESCO and the United States of America currently have Observer status.

Detectors for a new era of ATLAS physics

Flexible and accessible, the HiRadMat facilit...