Particle chameleon caught in the act of changing 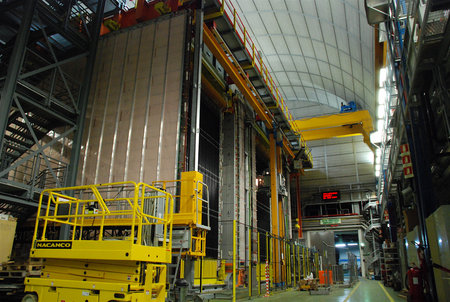 Lateral view of the OPERA detector

Geneva 31 May 2010. Researchers on the OPERA experiment at the INFN1’s Gran Sasso laboratory in Italy today announced the first direct observation of a tau particle in a muon neutrino beam sent through the Earth from CERN2, 730km away. This is a significant result, providing the final missing piece of a puzzle that has been challenging science since the 1960s, and giving tantalizing hints of new physics to come.

The neutrino puzzle began with a pioneering and ultimately Nobel Prize winning experiment conducted by US scientist Ray Davis beginning in the 1960s. He observed far fewer neutrinos arriving at the Earth from the Sun than solar models predicted: either solar models were wrong, or something was happening to the neutrinos on their way. A possible solution to the puzzle was provided in 1969 by the theorists Bruno Pontecorvo and Vladimir Gribov, who first suggested that chameleon-like oscillatory changes between different types of neutrinos could be responsible for the apparent neutrino deficit.

Several experiments since have observed the disappearance of muon-neutrinos, confirming the oscillation hypothesis, but until now no observations of the appearance of a tau-neutrino in a pure muon-neutrino beam have been observed: this is the first time that the neutrino chameleon has been caught in the act of changing from muon-type to tau-type.

Antonio Ereditato, Spokesperson of the OPERA collaboration described the development as: “an important result which rewards the entire OPERA collaboration for its years of commitment and which confirms that we have made sound experimental choices. We are confident that this first event will be followed by others that will fully demonstrate the appearance of neutrino oscillation”.

“The OPERA experiment has reached its first goal: the detection of a tau neutrino obtained from the transformation of a muon neutrino, which occurred during the journey from Geneva to the Gran Sasso Laboratory,” added Lucia Votano, Director Gran Sasso laboratories. “This important result comes after a decade of intense work performed by the Collaboration, with the support of the Laboratory, and it again confirms that LNGS is a leading laboratory in Astroparticle Physics”.

The OPERA result follows seven years of preparation and over three years of beam provided by CERN. During that time, billions of billions of muon-neutrinos have been sent from CERN to Gran Sasso, taking just 2.4 milliseconds to make the trip. The rarity of neutrino oscillation, coupled with the fact that neutrinos interact very weakly with matter makes this kind of experiment extremely subtle to conduct. CERN’s neutrino beam was first switched on in 2006, and since then researchers on the OPERA experiment have been carefully sifting their data for evidence of the appearance of tau particles, the telltale sign that a muon-neutrino has oscillated into a tau-neutrino. Patience of this kind is a virtue in particle physics research, as INFN President Roberto Petronzio explained:

“This success is due to the tenacity and inventiveness of the physicists of the international community, who designed a particle beam especially for this experiment,” said Petronzio. “In this way, the original design of Gran Sasso has been crowned with success. In fact, when constructed, the laboratories were oriented so that they could receive particle beams from CERN”.

At CERN, neutrinos are generated from collisions of an accelerated beam of protons with a target. When protons hit the target, particles called pions and kaons are produced. They quickly decay, giving rise to neutrinos. Unlike charged particles, neutrinos are not sensitive to the electromagnetic fields usually used by physicists to change the trajectories of particle beams. Neutrinos can pass through matter without interacting with it; they keep the same direction of motion they have from their birth. Hence, as soon as they are produced, they maintain a straight path, passing through the Earth's crust. For this reason, it is extremely important that from the very beginning the beam points exactly towards the laboratories at Gran Sasso.

“This is an important step for neutrino physics,” said CERN Director General Rolf Heuer. “My congratulations go to the OPERA experiment and the Gran Sasso Laboratories, as well as the accelerator departments at CERN. We’re all looking forward to unveiling the new physics this result presages.”

While closing a chapter on understanding the nature of neutrinos, the observation of neutrino oscillations is strong evidence for new physics. In the theories that physicists use to explain the behaviour of fundamental particles, which is known as the Standard Model, neutrinos have no mass. For neutrinos to be able to oscillate, however, they must have mass: something must be missing from the Standard Model. Despite its success in describing the particles that make up the visible Universe and their interactions, physicists have long known that there is much the Standard Model does not explain. One possibility is the existence of other, so-far unobserved types of neutrinos that could shed light on Dark Matter, which is believed to make up about a quarter of the Universe’s mass.

1.Italy's national nuclear physics institute, INFN (Istituto Nazionale di Fisica Nucleare), supports, coordinates and carries out scientific research in subnuclear, nuclear and astroparticle physics and is involved in developing related technologies. The institute operates in conjunction with universities and is involved in the wider international debate as well as in cooperation programs. The Institute was established by physicists in Milan, Padua, Rome and Turin on 8 August 1951with a view to pursuing and furthering the research started by Enrico Fermi's team of researchers during the 1930s. In over 50 years, INFN has gradually extended and currently includes thirty detachments, four national laboratories and a data processing centre. Furthermore, the area outside Pisa is host to the gravitational observatory EGO, jointly developed by INFN and the French national research centre. As many as 5000 contribute to the institute's endeavours; 2000 of whom are directly employed by it, 2000
2.CERN, the European Organization for Nuclear Research, is the world's leading laboratory for particle physics. It has its headquarters in Geneva. At present, its Member States are Austria, Belgium, Bulgaria, the Czech Republic, Denmark, Finland, France, Germany, Greece, Hungary, Italy, Netherlands, Norway, Poland, Portugal, Slovakia, Spain, Sweden, Switzerland and the United Kingdom. India, Israel, Japan, the Russian Federation, the United States of America, Turkey, the European Commission and UNESCO have Observer status.