The LHC enters a new phase 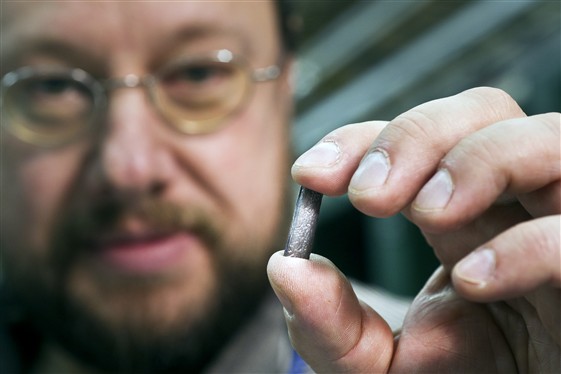 Geneva, 4 November 2010.  Proton running for 2010 in the LHC at CERN1 came to a successful conclusion today at 08:00 CET. Since the end of March, when the first collisions occurred at a total energy of 7 TeV, the machine and experiment teams have achieved all of their objectives for the first year of proton physics at this record energy and new ground has been explored. For the rest of the year the LHC is moving to a different phase of operation, in which lead ions will be accelerated and brought into collision in the machine for the first time.

A major target for 2010 was to reach a luminosity – a measure of the collision rate – of 1032 per square centimetre per second. This was achieved on 13 October, with two weeks to spare. Before proton running came to an end, the machine had reached twice this figure, allowing experiments to double the amount of data collected in the space of only a few days.

“This shows that the objective we set ourselves for this year was realistic, but tough, and it’s very gratifying to see it achieved in such fine style,” said Rolf Heuer, CERN’s Director General. “It’s a testimony to the excellent design of the machine as well as to the hard work that has gone in to making it succeed. It bodes well for our targets for 2011.” The main goal for 2011 is for the experiments to collect enough data – an amount known by the physicists as one inverse femtobarn - to make significant advances across a broad frontier of physics.

The LHC experiments have already entered new territory with their first measurements at a total energy of 7 TeV. The results so far have included the validation of aspects of the Standard Model of particles and forces at these new high energies; the first observations of the top quark in proton-proton collisions; limits set on the production of certain new particles, for example “excited” quarks; and hints of effects in proton-proton collisions that may be linked to previous observations in the collisions of heavy ions.

“The experiments are already providing an exciting glimpse of the new frontier”, said Sergio Bertolucci, Director for Research and Computing. “This rapid delivery of the first physics measurements at 7 TeV is a direct result of the excellent performance of the detectors, the high efficiency of the data collection and the swift distribution of data via the Worldwide LHC Computing Grid for analysis at centres across the globe.”

The Worldwide LHC Computing Grid (WLCG) combines the computing power of more than 140 independent computer centres in 34 countries and supports the LHC experiments. It handles more than a million computing jobs a day with hundreds of physicists performing data analysis. Data  has been transferred at impressive rates, witnessing peaks of 10 gigabytes per second, the equivalent of two full DVDs of data a second.

The change to running with lead ions – lead atoms stripped of electrons - opens up an entirely new avenue of exploration for the LHC programme, probing matter as it would have been in the first instants of the Universe’s existence. One of the main objectives for lead-ion running is to produce tiny quantities of such matter, which is known as quark-gluon plasma, and to study its evolution into the kind of matter that makes up the Universe today. This exploration will shed further light on the properties of the strong interaction, which binds the particles called quarks, into bigger objects, such as protons and neutrons.

“Heavy-ion collisions provide a unique micro-laboratory for studying very hot, dense matter,” said Jurgen Schukraft, spokesperson of the ALICE experiment, which is optimized to study lead-ion collisions at the LHC. “At the LHC we’ll be continuing a journey that began for CERN in 1994, which is certain to provide a new window on the fundamental behaviour of matter and in particular the role of the strong interaction.”

The LHC will run with lead ions until 6 December, before a technical stop for maintenance. Operation of the collider will start again with protons in February and physics runs will continue through 2011.

Ombud's Corner: Why didn’t you tell me before...

A very exciting year ahead

Michel Spiro promoted to officer of the Legio...

The 2021 five-yearly review completes its cou...