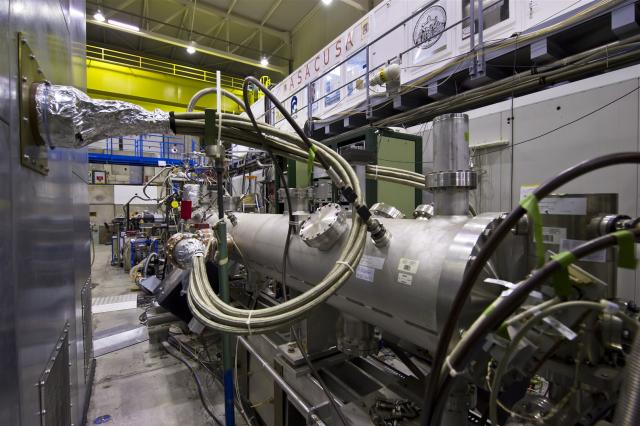 Geneva, 28 July 2011. In a paper published today in the journal Nature, the Japanese-European ASACUSA experiment at CERN1 reported a new measurement of the antiproton’s mass accurate to about one part in a billion. Precision measurements of the antiproton mass provide an important way to investigate nature’s apparent preference for matter over antimatter.

“This is a very satisfying result,” said Masaki Hori, a project leader in the ASACUSA collaboration. “It means that our measurement of the antiproton’s mass relative to the electron is now almost as accurate as that of the proton.”

Ordinary protons constitute about half of the world around us, ourselves included. With so many protons around it would be natural to assume that the proton mass should be measurable to greater accuracy than that of antiprotons. After today’s result, this remains true but only just. In future experiments, ASACUSA expects to improve the accuracy of the antiproton mass measurement to far better than that for the proton. Any difference between the mass of protons and antiprotons would be a signal for new physics, indicating that the laws of nature could be different for matter and antimatter.

To make these measurements antiprotons are first trapped inside helium atoms, where they can be ‘tickled’ with a laser beam. The laser frequency is then tuned until it causes the antiprotons to make a quantum jump within the atoms, and from this frequency the antiproton mass can be calculated.  However, an important source of imprecision comes from the fact that the atoms jiggle around, so that those moving towards and away from the beam experience slightly different frequencies.  A similar effect is what causes the siren of an approaching ambulance to apparently change pitch as it passes you in the street. In their previous measurement in 2006, the ASACUSA team used just one laser beam, and the achievable accuracy was dominated by this effect. This time they used two beams moving in opposite directions, with the result that the jiggle for the two beams partly cancelled out, resulting in a four times better accuracy.

“Imagine measuring the weight of the Eiffel tower” said Hori. “The accuracy we’ve achieved here is roughly equivalent to making that measurement to within less than the weight of a sparrow perched on top. Next time it will be a feather.”

Environmental awareness: how CERN supports an...

Brazil to become an Associate Member State of...