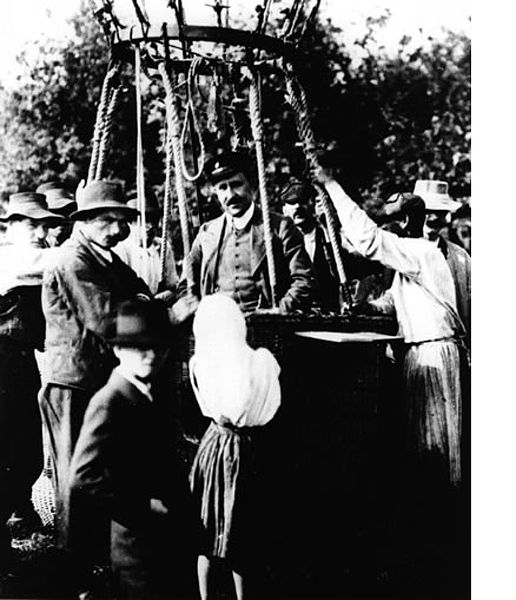 Hess in the basket of his hot-air balloon, sometime in 1912 (Image:Wikimedia commons)

In 1911 and 1912 Austrian physicist Victor Hess made a series of ascents in a hydrogen balloon to take measurements of radiation in the atmosphere. He was looking for the source of ionizing radiation that registered on an electroscope – the prevailing theory was that the radiation came from the rocks of the Earth.

To test the theory, in 1909 German scientist Theodor Wulf measured the rate of ionization near the top of the Eiffel tower (at a height of about 300 metres) using a portable electroscope. Though he expected the ionization rate to decrease with height, Wulf noted that the ionization rate at the top was just under half that at ground level – a much less significant decrease than anticipated.

Victor Hess was one person to go further by taking electroscopes up in a balloon. In 1911 his balloon reached an altitude of around 1100 metres, but Hess found "no essential change" in the amount of radiation compared with ground level. Then, on 7 August 1912, in the last of seven flights that year, Hess made an ascent to 5300 metres. There he found the rate of ionization was some three times that at sea level and concluded that penetrating radiation was entering the atmosphere from above. In an earlier flight he had found no noticeable drop during a partial solar eclipse, so he could rule out the Sun as the source. Hess had in fact discovered a natural source of high-energy particles: cosmic rays.

About cosmic rays (from the CERN courier)

70 years of theoretical physics at CERN

Looking back on 50 years of hadron colliders