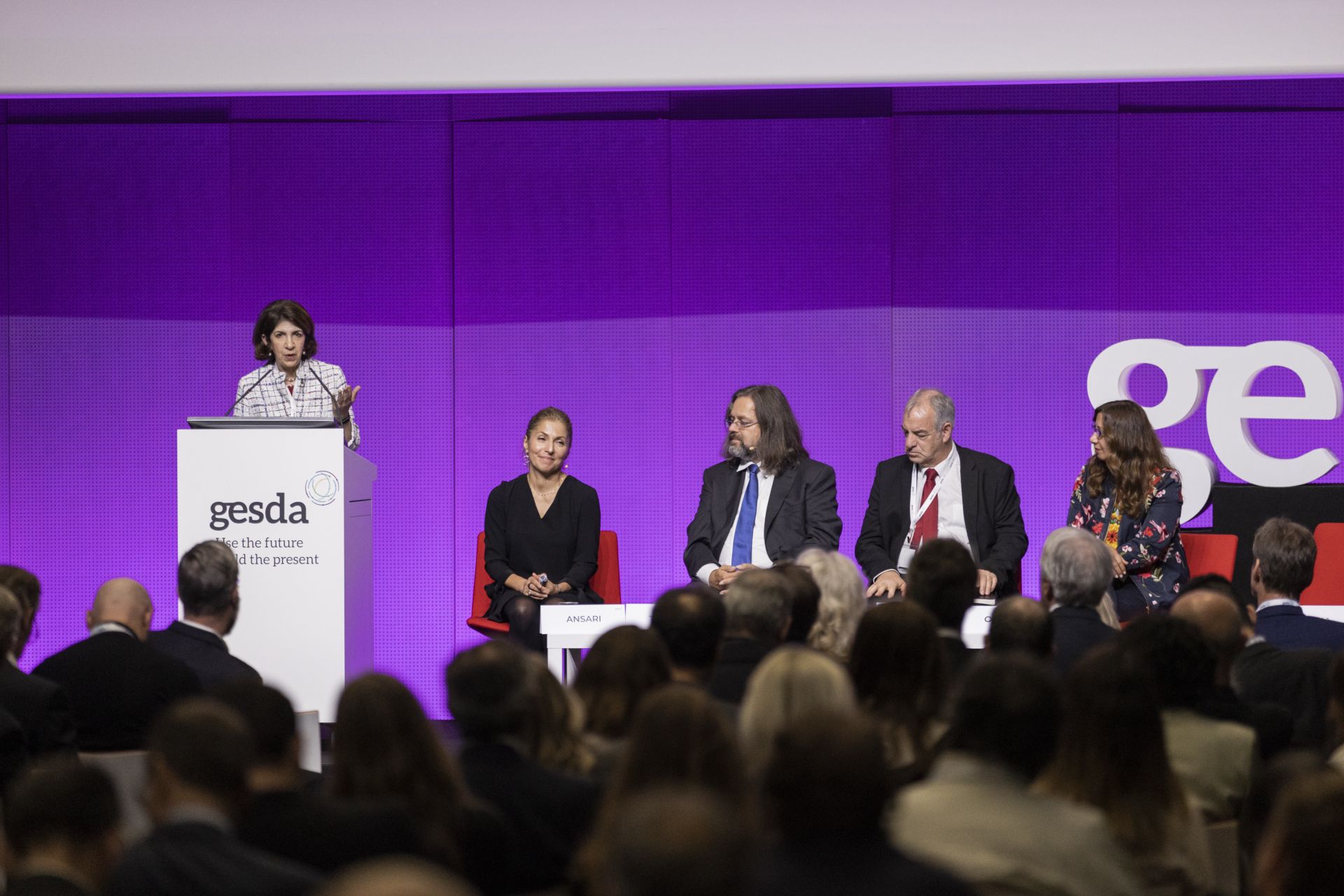 CERN has joined a coalition of science and industry partners proposing the creation of an Open Quantum Institute. This institute will work to ensure that emerging quantum technologies are put to use to tackle key societal challenges. The proposal is being made through GESDA, the Geneva Science and Diplomacy Anticipator Foundation, in collaboration with leading research institutes and technology companies. Other founding supporters of the Open Quantum Institute include the University of Geneva, the Swiss Federal Institutes of Technology in Zurich (ETH) and Lausanne (EPFL), Microsoft and IBM.

The proposal was launched at the 2022 GESDA Summit. During her address at the event, CERN Director-General Fabiola Gianotti highlighted the potential of quantum computing – and other associated quantum technologies – to help achieve key UN Sustainable Development Goals.

“As it did for the creation of CERN, Geneva can play a key role in bringing science and diplomacy to recognise the importance of working together, in order to develop real-world applications for transformative technologies,” says Gianotti, who is also a member of the GESDA Foundation’s board. “The Open Quantum Institute will benefit from CERN's experience of uniting people from across the globe to push the frontiers of science and technology for the benefit of all. We will work to ensure that quantum technologies have a positive impact for all of society."

CERN has long recognised the potential of quantum technologies. In 2020, the Organization launched the CERN Quantum Technology Initiative (QTI), which is exploring the potential of these breakthrough new technologies for particle physics and beyond, in collaboration with its Member States and other key stakeholders. Today, the initiative runs 20 R&D projects, several of which are carried out in collaboration with leading technology companies through the CERN openlab framework.

“By the nature of its research and the technologies it develops, CERN is well positioned to make significant contributions to the quantum revolution,” says Alberto Di Meglio, head of CERN QTI and CERN openlab. “Building on the Laboratory’s collaborative culture and proven track record of developing breakthrough technologies, CERN QTI provides a platform for innovation.”

“This platform builds on national quantum initiatives in CERN’s Member States and beyond, fostering pioneering new applications of quantum technologies – both for science and society,” explains Di Meglio. “Experience and knowhow from the CERN QTI will feed into the Open Quantum Institute, helping to fulfil its mission of maximising the societal impact of these technologies.”

As the next step in the process, the GESDA Foundation will launch a survey to help shape the priorities of the Open Quantum Institute, which will begin its “incubation” phase in 2023. Members of the institute will work to engage further with UN organisations, quantum scientists and industry leaders over the coming months.

Find out more on the GESDA website. Full details on the Open Quantum Institute can be found in the announcement published by the GESDA Foundation today.

On 1-4 November, CERN will host a special conference on the use of quantum technologies to support particle physics. Find out more about this here.

Computer Security: When auto-update is not so...

Computer Security: What’s under the tree?

Computer Security: When your restaurant turns...